Airshow of the Cascades Video from Rick Brown on Vimeo.

On August 23 and 24, 2013 I attended the Airshow of the Cascades in Madras, Oregon. To give you some idea of how much fun this was, let me start by telling you the only negatives to the experience. We’re sitting out in the sun a lot, so obviously one needs to wear sunscreen. We figured that it wouldn’t last all day, so my dad started to reapply and the spray bottle broke. We were unable to get anymore sunscreen out of the bottle, so the part of my face the sun hit from about 2:30 until the end of the show got a bit burnt. The other negative was when I was sitting my camera down on its lens hood to rest, some tiny little wasp decided the hand grip to my camera was a good spot to rest. Thus, when I went to pick it up to take a shot I got stung on my ring finger. Fortunately, the poison of this type of wasp is either less effective or there was less compared to a honey bee and the pain subsided in about ten minutes.

We left our house in Keizer, OR around 10:00am on Friday and drove up I5 to 212 and then got 26 to go the rest of the way. This made for a pretty good start to our day, 26 is a picturesque drive going through Government Camp and offering fantastic views of Mt. Hood. This also coincided with the Hood to Coast relay race, so we were able to witness some of this big event on our way.

We arrived in Madras around 1:30, giving us some time to relax in front of the TV in our hotel room before grabbing a bit to eat and being at the airport at 4:00pm when the gates opened. I hadn’t been to an airshow in a long time and had never been to one held around the sunset hours. It was really cool to see the performances in the nice light of sunset. It did get a bit dark for aviation photography, but with a little of Lightroom’s noise reduction, it all turned out alright. The show concluded with some fireworks. I’m not a big fan of fireworks, but had always wanted to photograph them. This opportunity led me to discover that what I wanted to do with fireworks was surprisingly easy. I made a shot about ½ hour before the fireworks started to capture some color in the scene to serve as my background. Then when the fireworks started I used bulb mode to capture several bursts. In post, I processed both images separately for good color in Lightroom and then loaded them into Photoshop as layers in one image. I put the fireworks burst shot on top and changed the blend mode of the layer to lighten, this dropped everything out but the fireworks themselves. I had moved the camera a bit in between so I applied free transform to the fireworks layer to tweak it to where it lined up to where it should be. Then I merged the layers down and applied a Color Efex Pro4 Glamour Glow.

Saturday was an early morning to get there when the gates opened. This was fantastic for static and taxi shots in the morning light and limited people wondering in and out of the shots. I also met some of the photographers I knew from the Pacific Northwest Aviation Photographers group on Facebook and it’s always nice to meet these folks in person rather than just on Facebook (in the video you can see me shaking hands with one of these gentlemen.) Saturday was an intense day of shooting culminating in a wonderful photographic event the “Wall of Fire” pass of Tillamook Air Museum’s B17 “Chuckie.”

The result of all this has been a group of photographs that I stare at more than I’ve stared at my photos in quite awhile.

And of course the one I stare at the most, that “Wall of Fire” pass by “Chuckie.” 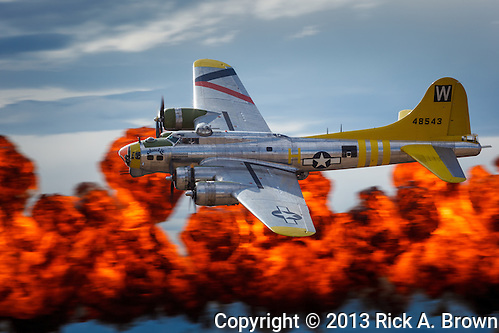 Take a look at my aviation portfolio or my images from the Airshow of the Cascades.