The August 2013 Second Saturday at WAAAM was an interesting one, centered around the items in their collection I know the least about, motorcycles. I have always liked the image of the young man coming back from a war a bit disenchanted and drops out of society and wanders around on his motorcycle. However, I’m just not personally comfortable on a two wheeled vehicle moving faster than bicycles. (You can ask the few folks who’ve given me a ride on a motorcycle.) Thus, I’ve never learned that much about them, nowhere near what I’ve learned from approximately 35 years of being fascinated with planes.

Thus, it was cool to get a chance to get a closer look at many of WAAAM’s old motorcycles and just days before they acquired a 1947 Indian, the sort of bike that fits my ideal of what a motorcycle should look like.

There was also the surprise visit of an Austin Healey club. It was a total shock to see that many Austin Healeys lined up in the field.

I was able to make an image that day that met the vision in my mind’s eye about the veteran biker pretty well and had a great time along the way. This particular image was worked up using the layered B&W and color technique I described here, except the initial image was not an HDR file. 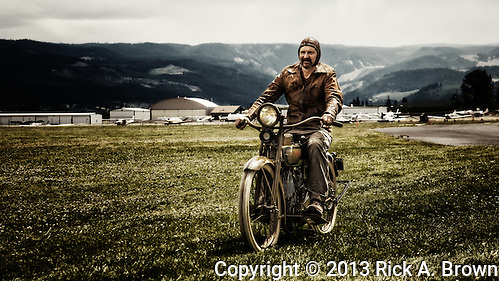 Take a closer look at my 8/2013 Second Saturday Photos, or all of my WAAAM images.