Take a look a my portfolio site, www.rabimaging.com.

Previously I discussed building a lifestyle photography portfolio. So this past month I contacted the fiancé of the young woman I previously photographed cooking dinner and asking him if he’d be willing to ride his bicycle back and forth across one of Oregon’s many covered bridges at either sunrise or sunset for me. I was quite surprised when he said sunrise would work better for him, although morning does tend to work better photographically. First of all, despite the light being very similar, it’s usually a little better in the morning and secondly there’s usually less traffic to put up with on the roads, etc.

So we met at Gilkey Bridge at 6:00am. I had looked at the maps and tried to evaluate which one of the bridges near Scio would look best at sunrise. I eliminated Shimanek Bridge from the considerations because of the limited vantage points available that don’t place you squarely on a farmer’s land. This is something I wouldn’t do without permission.

We started the shoot with some backlit portraits. I was going for a casual look with some flare. When post processing I accentuated the flare a bit using the new circle filter in Lightroom. I centered it on the brightest part of the flare, inverted the mast to affect the center of the filter more. Then I increased the exposure a bit, reduced the highlights a tiny amount, reduced the clarity and saturation a bit, and finally added a tiny bit of yellow. Then in Color Efex Pro4 I applied the Glamour Glow filter to finish enhancing this look. 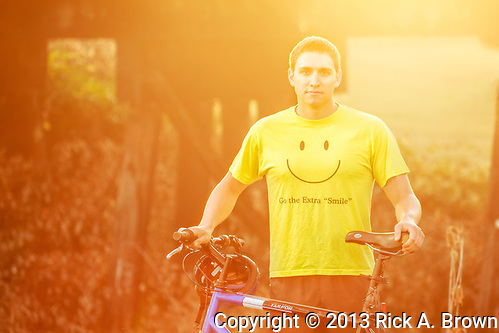 Then, when the sun had gotten slightly higher in the sky, we began with the real work of the shoot; photographing him riding back and forth across the bridge. I worked it from many angles, using fill flash in a soft box with ½ cut CTO on the backlit images. The one limitation that frustrated me a bit was where the ground sloped away to the river did limit me from some of the angles I would have liked to have shot. There just wasn’t any way to actually stand in those locations.

Anyhow, overall I am very pleased with the results. Take a look at my portrait portfolio.

I’m calling this last group of photos, for lack of a better name, “Party Photos.” These are the images I had Emily targeted for in our little shoot. Essentially, more natural looking portraits made in her home, she hosted the shoot by the way, very thankful to her for that. The home would be visible in the background, unlike the other images where the background was meant to either be not noticeable or replaced by another.

In the end, like the old Hollywood style photos, we photographed both women this way. In fact, the most popular images are proving to be the two women together.

Emily is a close friend of the woman who introduced me to the roller derby world, Alethea, who I had met through photography. This shoot was the first opportunity I had to really get to know her however and she is a wonderful lady, who kept her commitment to our shoot despite many issues arising for her that day.

Lighting for the shoot was of two basic types. The photos on the couch were a large octabank to one side and a strip bank in front of the ladies powered far down as fill. For the photos in the stairwell, we were definitely going for a less polished look to the light. What I did was put a beauty dish with diffusion sock at a 45° to the area where the ladies would be posing. I put the light much further away than usual, both to give the women a wide area to move around in and to give that less polished look to the light. The light bouncing around off all those white walls, kept it from getting too rough.

Post processing on these is kind of interesting. You can probably tell by looking at these, that I did not decide on one basic way to do this. First off I will say the retouching by Scott Kelby’s techniques, I decided to do less heavy handed than I usually do.

As far as the finishing effects, you’ll see there were basically three approached I took. First off, was the nothing special approach, where I finished the retouch and called it good. Secondly, was the approach where I used the Bleach Bypass recipe from Color Efex Pro4. This came with the software and is made of Bleach Bypass, Glamour Glow, and a vignette. Finally, there is my favorite of the approaches and is what I used on all the photos in the stairwell. After the retouch, I applied the Glamour Glow filter using the cool glow preset and the Darken/Lighten Center filter.

This is the post processing used on this, the most popular ever image on my web site.

Take a closer look at these images, or look at my portrait portfolio.

Well, in regards to my new portrait portfolio (in the above slide show, the outdoor image isn’t new), I’ve written a lot already how important the teaching of the folks over at Kelby Training was, and how important Nik Software was. So today, I wanted to write a bit about how important the Elinchrom lighting kit was.

Recently, I purchased the Scott Kelby’s Light It. Shoot It. Retouch It. LIVE Tour Kit from B&H. You can see an unboxing video here.

I am loving this kit. Elinchrom products are excellent. The monolights are powerful and easy to use. Most notably the wireless system. This allows control of the power output of the various lights independently from the camera. This makes working with few or no assistants much simpler and efficient. The lighting accessories, the most important part of any lighting kit, are excellent. The quality of light they produce is amazing and other than initial assembly, are easy to use.

Any deficiencies in the kit would be there isn’t a boom, or any accessory to aid you in holding the light away from the stand. I quickly rectified this by buying an Avenger miniboom. It turned out to be a bit of overkill, but always better to have more performance out of your equipment than you need than less. The other deficiency would be that there are only two lights. Some of the setups discussed in Light It, Shoot It, Retouch It, require three. I rectified this by using a speed-light I had on hand. The only problem I had with this system was that the speed-light needed to be run by hard-wire. Thus, not allowing the wireless system with this setup, being less convenient. It worked fine though, and I will make do with that system until I can acquire a third BxRi 500.

Take a look at my portrait gallery or my older portraits.

Admittedly, I’m going back to ancient history here. This image is from the film days, holy cow!

Anyhow, I had been shooting the old in camera Orton effect. The effect where you take one image in focus and another out of focus making sure the out of focus image is larger. The exposure is figured such that it is additive and makes one good image.

I was also at the time doing flash macro where the subject would be properly exposed and the background would fall to black or nearly so. (Since I have pretty much stopped this, because most potential clients don’t like it, although I do personally.)

One day when I was showing a friend a bunch of these images, he suggested that I combine the two methods. Thus, this image was born. I photographed two images illuminated by flash very high contrast. One image was in focus and the other was out of focus with the out of focus image larger than the in focus image. Special effects were possible in analog photography as well, although there was a certain degree of chance to what would happen.

Take a look at some of my other macro stock images.

I’ve mentioned before, although not often enough that I’m sure all my readers know, but I am going to get into portrait photography very seriously soon. I am going to acquire some serious studio lighting equipment and make some portfolio images to promote this part of my business.

I thought today I’d write about some of what I learned with my first real experiment with this sort of photography. In this instance I had used a softbox on a Canon speedlight.

With the photos of the young woman, I went with clamshell lighting. The speedlight was mounted in the softbox above and to the front and we used a reflector below, with a second speedlight in a Lastolite Backlight to provide the white background. The mistake I made here was positioning the softbox too much above and not enough forward, shadowing her eyes more than I’d like. This problem might have been stopped if I was shooting tethered, making it easier to see that it was a problem while I was still shooting.

With the photos of the young man, the idea was to create an edgy photo of him playing bass with a balanced ambient exposure from the street scene. The big mistake I made here was that I did this too late at night and it was impossible to balance the street’s ambient light. I now know that the best way to pull off this look is to do a composite with the portrait being lit in the edgy three light method; two gridded flashes behind for rim light and a beauty dish above and to the front for fill. I’ve started shooting backgrounds for trying it again this way.

Recently, I began experimenting with a homemade system for diffusing flash for macro photography. This system probably isn’t as good as a system you would purchase, but it does a good job for almost no cost.

I usually use two speedlights in my insect photography so I made two of these. Take frosted white, plastic, freezer containers and cut a slit in them that will allow the head of your speedlight to fit snugly inside. Rig these up on your macro flash bracket and balance the ambient light one to two stops darker. I manually set my exposure (usually) to 1/200 sec at f/16 and then vary the ISO to balance with the ambient light.

The attached image is my favorite done this way. I’d love to hear what you think.