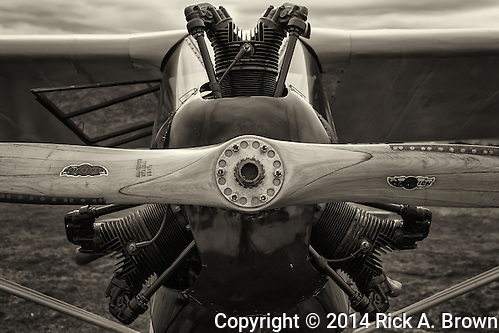 The Piper J3 Cub, like many aircraft is available with various power plants, the letter at the end of the model number denotes what engine is on the plane.  The P indicates a Cub manufactured with the 50hp Lenape Papoose, a small 3 cylinder radial. There were only approximately 50 Cubs completed this way and from what I’ve heard, these numbers are now down to two.

This one, with the color scheme reversed from the typical Cub, resides at Western Antique Aeroplane and Automobile Museum, in Hood River. WAAAM flies this aircraft fairly regularly and took it to the Piper Cub anniversary Airventure at Oshkosh. The plane was trucked across most of the country and then flown the last few miles to the fly-in.

I made this particular shot to highlight the unusual look of the Papoose engine. So I positioned the camera as close as I could directly in front of the propeller hub. After looking at the resulting photo, I thought it would look particularly good in B&W, so I took it into Silver Efex Pro2 and processed it with the High Structure Harsh preset and toned it Sepia. The resulting photograph is my favorite B&W aviation photo up to this point.

Take a look at some other images from the March 2014 Second Saturday.