On some level, lifestyle photos have always been a part of what I do. However, when it recently became obvious to me that these style photos were a huge part of the local advertising scene, I became aware that most of the images I had up to this point were unsuitable for a portfolio. This was either due to them being originally shot for an editorial purpose or the same face in too many photos, and other similar issues. Thus I decided to shoot some personal projects to flesh out a portfolio and these images would serve the dual purpose of being useful as stock.

I like good food, a fact that I wish was less visually obvious. I like to cook sometimes although, am very sensitive to it becoming routine. That not liking it to become something I’m doing all the time explains why I haven’t seriously considered doing it professionally. I was aware that a good friend liked to cook much more than I do. Recently she attended a week long workshop at the American Culinary Institute. I felt this made for a great opportunity to add to building a lifestyle portfolio.

So I made arrangements, with my friend to shoot her cooking dinner and then we all ate together. We combined this with a headshot shoot she wanted to update her social media profile photos. I brought most of my studio gear, but ended up doing most of the cooking photos with a speedlight in a Lastolite softbox. I shot a series of test shots first with no flash to manually set the exposure where I wanted. The idea was to light the scene moderately well with the ambient light from the window and overheads and then add the flash to light our chef. Once the exposure was set for the ambient I added my speedlight on manual and balanced its power to where I wanted. The ironic thing is my last test shot ended up being my favorite photo from the shoot. 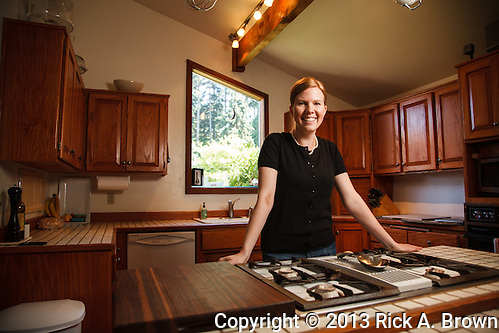 My lifestyle portfolio isn’t ready yet, why don’t you take a look at my people.