March 12, 2016, was Second Saturday at WAAAM. My expectation was that the weather would be very bad with lots of wind and rain, essentially stranding us inside. I still wanted to go, because one of the main things going on was a speech about the restoration of the Stearman 70, the prototype of the famous line of Stearman trainers of WWII. I have written a Resurrection Report piece for Warbird Digest that should appear in the May/June issue. Thus, I was very interested in going, even if the weather kept anything else from happening.

Most of the drive, the weather was very ominous, and it seemed like the my expectation was accurate. However, the last ten minutes of the drive or so, it seemed quite promising much to my surprise.

As a photographer, most of the interesting stuff happens outside. At this point, I think I pretty much have most of the interesting pics I can get inside, at least without bringing a lighting kit, etc. So I headed outside fairly early and hung around watching volunteers prepare cars for the day. At one point I moved inside for a bit, probably to check my phone and see if anything significant was going on in the outside world. When I stepped back out, the Waco 9 was sitting outside the restoration hangar and it appeared they were preparing for a engine test.

This is when it became apparent that this was going to be a fantastic Second Saturday. The Curtiss OX-5 sprung right to life on the first prop pull. I spent most of the day around the activity around the Waco, only leaving to eat and the speech about the Stearman. I am a Waco addict and this promises to be the oldest Waco when it flies.

Take a closer look at the images from the March Second Saturday. Or take a look at my aviation portfolio. 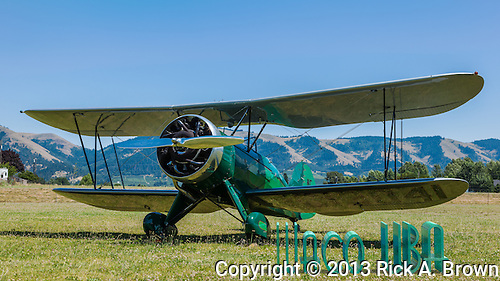 This blog entry is going to be pretty short, because for the bulk of the technique here I’ll refer to Corey Barker’s article in the November 2013 Photoshop User (follow the link if you’d like to join NAPP and get the article.)

With this image I was trying to increase my abilities with the 3D text and trying to realistically blend it into an image. To do so I started with this image of the 1932 Waco UBA on grass, you can see this plane in person at the Western Antique Aeroplane and Automobile Museum. I felt that the mixed field of grass and clover would provide greater challenge in making it appear as if the text was sitting on the field.

The making of the 3D text went smoother and faster this time. My improving familiarity with the process made things move much faster, but the render still took a long time. I was doing this on a full res image, however. If you do it on a smaller image, I’m sure it will go much faster.

The real fun came after the render was complete. I created a layer mask on the 3D layer, then lowered the opacity of the layer a little to help me see the grass and clover under the text and shadow. Then with a very small brush with about 80% hardness, I painted on the mask in black over blades of grass and pieces of clover that I felt would be sticking up from the shadow into the light. Also I painted on the mask over grass and clover I felt would be sticking up in front of the letters. In reality, the clover was shorter in the area the text now rests vs. where the plane sits.

Take a look at my 3D text experiments, or my images of the Waco UBA.