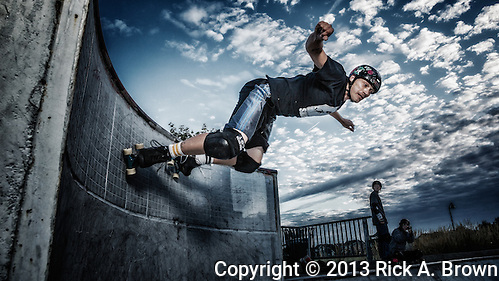 I was looking to add some additional faces to my lifestyle portfolio and was hoping to work some outdoor skating stuff out with my roller derby friends. One of my friends in the community hooked me up with a family that enjoys doing extreme skating on quad skates sounded perfect to me.

So I contacted them and we began to work out the details of a shoot. Unfortunately, as many of you may know the Northwest is in the midst of its rainiest September ever. We had a needle to thread to pick a time when the pavement at the skate park would be dry enough to do this safely. We ended up picking the morning before the worst storm arrived. I fretted all night the night before and the morning of the shoot, worried that the storm might arrive early and shut us out. When we all got to the skate park, however, the sky was nearly ideal. There were dramatic, threatening looking clouds for drama, but otherwise the weather was nice. I do wish the quantity of light had been a little higher to allow for a lower ISO to be used, but it still worked out fantastically.

For my look for these photos I went back to my inspiration from Joel Grimes, and all that I learned about creating that look from Joel’s online classes and Matt Kloskowski’s book. This time though, it was going to be more practical to shoot on site rather than photograph the people on a solid background and then the background later. So I thought about many ways to still get the look. I thought of shooting for a composite onsite, but in the end decided that this time I wanted to try and get the look I wanted in a single frame.

First off, we shot some environmental portraits, will discuss those later. After those were complete, we started to work on the stunts. The members of the family talked to me about the stunts they could do and then we discussed which would look dramatic in a photo. Next step was for the skater in the photo to show me where they would enter and exit the stunt, so I could work out a dramatic, but safe place for me to be. This particular photo was one of the easiest in this regard as most of the photos required me to sit or kneel on one of the steep slopes of the park and it was challenging to keep from sliding out of position. For this shot, I was able to sit on the sidewalk that surrounded the park and lean over the wall a bit for the angle.

I had an assistant with a speedlight in a soft box. He held this slightly higher that where the skater would be and a little to my left. I shot everything manual placing the flash exposure a tiny bit brighter than the ambient. I then prefocused on a spot on the wall and shot at the most dramatic spot of his path across the wall.

To post process this image I began in Lightroom. I went the path of giving it a moderately high contrast level. Then bringing the highlights way down, the shadows way up (approximately -80 and +80 respectively). Then I adjusted the whites and black as necessary. Finishing off by raising the clarity to approximately a +40.

Then I opened the image in Photoshop. I started by converting the background layer into a regular layer. Next, I applied Silver Efex Pro2, starting with the High Structure(harsh) preset. When I got that to look as I wanted, I put the original layer on top and changed the blend mode to softlight. Then I stamped all visible layers to the top and applied a 16 pt Gaussian Blur, changing the opacity to overlay and lowering the opacity to 40%. After this I stamped all visible layers on top again and opened in Color Efex Pro4. I applied the Detail Extractor filter and used negative control points to reduce the effect on everything but the skater. I completely removed the effect from the sky. Then I finished it off with Darken/Lighten Center.

I am pretty darn happy with the results, let me know what you think.

While you’re at it, take a look at the rest of the photos from the shoot, or my lifestyle portfolio, or my portrait portfolio.