I promised that I’d be back to talk about the environmental portraits.

In the planning and run-up to doing this shoot I was very excited about the environmental portraits. They were not the primary reason for the shoot, those were the stunts, but I felt that we could do something really cool with these. I feel that the results bear that prediction out.

For the most part, I was aiming for the same kind of impression with these images as the stunt photographs; a larger than life, heroic look. The sky helped a lot. My part in that equation was to shoot low with my 24-105 at its widest setting and fairly open apertures; I shot the majority of the portraits at f/5.6.

I did the post processing pretty much the same as the stunts and I detailed that pretty closely in the previous entry, so I won’t bore you with the details again. I would like to point out that with a shallow depth of field it is pretty important to control the Detail Extractor filter in Color Efex Pro4 pretty carefully as it looks strange applied to out of focus things. 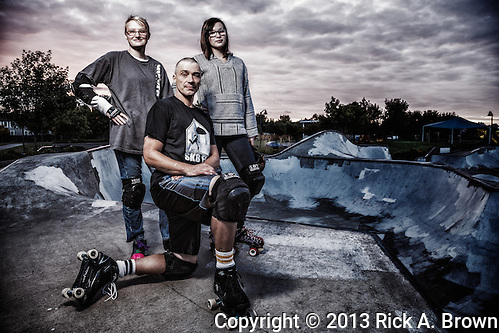 I love doing this sort of shot and one of my fantasy gigs would be to get an assignment to go to the Reno Air Races and photograph the racers in front of their planes in this style. Can you imagine a photo of Steve Hinton in front of Voodoo done in this style?

Check out my portrait portfolio or the entirety of the skating shoot.

2 thoughts on “A Family that Skates Together…: Skating Environmental Portraits”